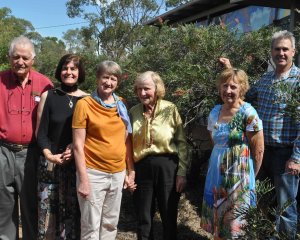 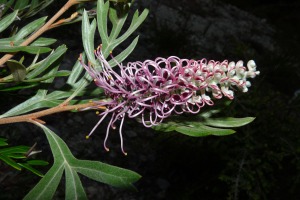 Origin: Caretaker Marion Firns reports on the discovery of this chance hybrid: As you know some of the Garden jobs are tedious and time consuming. One such project was recording the plants in the Garden. In July 2006, Nita C. Lester and I were recording that particular section. I was quite amazed that Nita hesitated when she came to identify the little plant. We had recorded hundreds of plants and this had never happened before. She thought we should monitor it, just in case it continued to grow.

Warren immediately caged it and pruned the surrounding plants just enough to give the little one room to grow. He also supplied water to the plant. At this stage, this was just another Garden job to be added to the ever growing list.

That all changed in November 2006. That particular morning is very vivid in my memory. It was my turn to check the drippers. This job is on the ground and I don’t know why I looked up. The first flower had appeared. I was really excited as the flower was stunning and so different from the other grevilleas – not that I was an expert. I particularly loved the way the styles made beautiful pink loops before they opened. Underneath I could see a velvety burgundy. I couldn’t wait to photograph it. I remember racing the old pushbike back to Terpersie Cottage to collect both Warren, and my camera, so I could let Nita know. She was just as excited as I was and was keen to continue.’

Development of plants and paperwork: The plant survived two periods of drought and one very wet time when it stood in water for over a month. It flowered often so it was decided to keep it lightly trimmed.

Nita asked Colin Campbell about procedures to follow if this hybrid proved to be horticulturally important and should the Garden Directors register it. Colin suggested registering on both the Australian Cultviar Registration and Plant Breeders Rights before selling. The three sisters were all sold before registration so neither the Gordon family nor the Garden have benefitted from the sale of labels for these three plants. Colin also suggested the Directors approach Edward and Mary Bunker of Aussie Winners to propagate ‘Dorothy’. The Bunkers had been part of the trials for ‘Robyn’ so they had had connections with our Garden in the past. Nita took cuttings to them with images of the flowers and they indicated they would begin trials.

The Directors decided to name the new hybrid Grevillea ‘Dorothy Gordon’ after Dorothy Gordon an excellent watercolourist and wife of Dave Gordon. The Garden would then have grevilleas named for the three sisters/daughters and their mother.

During this time, Nita had success in propagating four plants and one of these was planted in Brisbane on the acacia/ironbark ridge type soil. Peter Reilly took cuttings to the Gold Coast and was successful, so another test specimen was planted in the coastal sands of Runaway Bay. He took more cuttings some of which were planted out in the clay loam of Nerang.

The Bunkers had mixed success with their earlier cuttings but did achieve a number of successful potted plants from which numerous cuttings have since been taken. A marketing agreement was written between Aussie Winners and the Garden.

Test specimens have been successfully grown in the varied soil types of the Gold Coast, Nerang, Redland Bay, Brisbane and Mapleton. Peter Reilly tested the effects of pruning and reported ‘Dorothy’ recovers positively after a reasonable trim but not after a heavy pruning.

Label design and release planning: The Directors’ researched label designs to determine the most appropriate layout and data inclusions. Aussie Winners designed the label to the Directors’ specifications. Promotional material was written in preparation for the release.

In August 2013, Carole and Richard Green assisted with the planting of eleven mature specimens at the Garden and these continue to thrive. 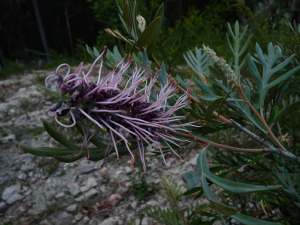